DepthQ meets Hollywood’s demanding image quality standards by precisely and efficiently varying the polarity of light passing through it, in perfect synch with the double or triple-flash of left and right eye images from digital cinema projectors.

The DepthQ Standard Polarization Modulator has been successfully reviewed by executives from six major Hollywood studios and is listed on the Walt Disney Studios Motion Pictures Approved Equipment List. 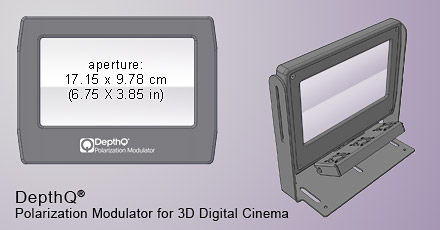 This 50µs switching time actually occurs faster than the smallest dark interval setting currently available in digital cinema projectors…so when they ‘catch up’, even brighter 3D images will result!

The system includes both the liquid-crystal modulator as well as its control unit, plus three types of mounting hardware (Wall, Table, or Rack mount), and a show-controllable actuator to quickly (4 seconds) and automatically move the modulator in and out of the projection path (for switching between 2D and 3D). Sync output from your projector’s GPIO port is supplied to the control unit, which then conditions the signal to match the modulator’s required input.

The optical window is also heat-protective, employing both air cooling and a nano-scale metal-on-glass polarizer to reflect thermal energy and ensure longevity. With no lamp/Lumen limitations, the DepthQ® Standard Polarization Modulator thus supports all current and future digital cinema projectors.

The DepthQ Standard Polarization Modulator for 3D digital cinema has been successfully reviewed by executives from six major Hollywood studios and is listed on the Walt Disney Studios Motion Pictures Approved Equipment List. It is available in circular polarization only. However, we do offer a non-DCI version of the modulator for advanced 3D visualization, and that is available in linear or circular.

The DepthQ Standard Polarization Modulator is co-developed by Lightspeed Design, Inc. and LC-Tec Displays AB. The two companies have over twenty-five years of experience in their respective fields of stereoscopic design and liquid crystal manufacturing and development.

First introduced at Cinemacon in March of 2011 and then showcased at InfoComm’11, CineEurope, ShowEast and CineAsia, the DepthQ Standard Polarization Modulator has received an amazing response. Units are currently installed in the United States in Alaska, California, Florida, Michigan and Washington, as well as internationally in Australia, China, Dubai, Germany, India, Israel, the Philippines, Turkey, and the UK. Interest in the product continues to grow as orders flow in from around the world.

1 Your optical light efficiency will vary based on 3D glass manufacturer’s product specifications.